In today’s fast-paced and dynamic digital world, it’s nearly a requirement for businesses to deliver web experiences that are more secure, better performing and feature-rich. Luckily, there is an easy way to close the gap if your organization is still a little behind; Simply get your CMS updated to its latest version.

With the release of Drupal 9 in mid 2020 and the news of an imminent Drupal 10 release, the mid-cycle time frame can be a confusing time for some organizations. As the details become more clear, Specbee is here to answer all your questions about Drupal 10. We’ll also help you get prepared for Drupal 10 and give you updates on what the Drupal 10 readiness initiative team is currently working on later in this article. When does Drupal 10 release and why is it releasing so soon?

Drupal 10 is tentatively scheduled to release between June 2022 and November 2022. As of the latest reports, the Drupal 10 readiness initiative team has been making great progress and is on track with its goals and deliverables - which means any delay would be unexpected.

The reason for such a fast cycle from Drupal 9 to Drupal 10 is that, since the release of Drupal 8 and its adoption of continuous innovation practices, Drupal has fueled integrations and dependencies with many third-party components which has, in a positive turn, actively driven technology advances. Integrating some of these fantastic components like Composer, PHP, Symfony and CKEditor (amongst many others) has taken Drupal’s usability and robustness to another level as well as opened doors to wider pools of talent.

But all of these component and dependency advances also means that Drupal will have to move at a faster pace to keep up with those release cycles. With every major integration update to major/minor versions, Drupal needs to update its major/minor versions as well.

Symfony is one of Drupal’s biggest dependencies. Drupal 9 requires Symfony 4 which reaches its End Of Life (EOL) by November 2023. There is a similar situation with CKEditor and other 3rd party components as well. With those major components reaching EOL, Drupal 9 will also be reaching EOL by November 2023. In preparation, Drupal 10 is scheduled to be released before then (between the window of June and November 2022) to give organizations enough time to upgrade. Upgrade to Drupal 8 or Drupal 9?

When Drupal 7 was released early 2011, there was huge excitement among the community because of the massive leap from Drupal 6. It was also a long time coming… It took almost three years of hard work, passion and commitment to build that game-changing version of Drupal.

But now that Drupal 7 is more than 10 years old (which is a century in “website age”), it is time to move on to a modern version of Drupal for all organizations. Drupal 7 reaches End of Life (EOL) in November 2022. One of the bigger reasons for this is that, with PHP and MySQL releasing their latest versions, it’s harder for Drupal 7 to stay compatible and for websites still using it to work as intended. More importantly, organizations are also missing out on key improvements and features that have been made since its restructuring in Drupal 8.

Drupal 8 was released in November 2015 and brought in huge architectural changes while embracing modern libraries and components. It was a whole paradigm shift for Drupal. With those advancements came semantic versioning, shorter release cycles and, most importantly, easy future upgrades - to the appreciation of many.

So, if you’re on Drupal 7 or Drupal 8, what’s your next move? That decision is a bit easier than you might expect. Drupal 8 reaches EOL by November 2, 2021 (it will no longer receive any further community support or security fixes) and all Drupal 8 sites need to upgrade to Drupal 9 before then. We recommend moving to Drupal 9 now. The good news is that the upgrade from Drupal 8 to Drupal 9 is really easy!

Drupal 9 was released in June 2020 and wasn’t very different from the last version of Drupal 8. The main difference is that it had cleaner & leaner code, the latest versions of some of the best technologies and a modern default theme. 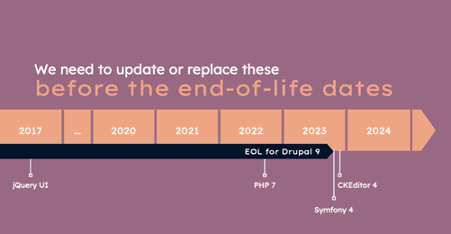 According to the recent DriesNote at DrupalCon Europe 2021, the Drupal 10 readiness initiative has been making some amazing progress and completed 70% of the work already!

Here’s what you can do to get ready for Drupal 10:

Updates from the Drupal 10 Readiness Initiative

Drupal 10 is already being built in Drupal 9. According to the Drupal 10 readiness initiative team, “Drupal 10 will be a refined version of Drupal 9”. The team has been working hard since March 2020 to make sure Drupal 10 is released on time without any glitches. If you would like to contribute to the initiative, you can do so through many different ways. Check out how you can help here.

Here are some of the latest updates from the Drupal 10 readiness initiative:

Resolved Symfony 4 deprecations in Drupal 9 for Symfony 5. It's just better for site owners and module developers to have as much Symfony 6 compatibility as possible in 9.3.

2. Remove jQuery UI components used by Drupal core and replace with a set of supported solutions

Rebuild jQuery UI functionality ourselves. This could be done either by using vanilla JavaScript or by using a framework such as React.

A set of best practices for naming, versioning, deprecating, leaving wrappers or not, forcing uninstallation, etc. Introduce a 'lifecycle' -property to be used in info.yml files, both for themes and modules.

4. Allow Drupal 9 to be installed with Twig 3

We don't know exactly when Twig 2 EOL will be, but whether it forces an update in Drupal 10 or 11, it is better to upgrade to Twig 3.

5. Add optional support for CKEditor 5 in Drupal 9 so we can remove CKE 4 from Drupal 10

Moving Ckeditor 5 to contrib for seeking the support from the community. The CKEditor 5 module needs to be stable in the last Drupal 9 minor if we want to be able to deprecate CKEditor 4 before Drupal 10, so we can remove CKEditor 4 in Drupal 10.

There is a great progress on PHP 8.1 compatibility. It has only two internal issues to fix now. Also, PHP 8.1 is in RC3, so it is quite stable now to work against.

Guzzle has been updated to Guzzle 7.3.0. It requires psr/http-client 1.0.1, which has also been added as a dependency.

Replace Classy with a new starter kit theme. The starter kit markup and CSS will be allowed to change over time since it acts only as a starting point for themes.

Remove modules where agreement was made and modules were deprecated in Drupal 9.

A big thanks to @AkshayDevadiga, who is also a contributor to the Drupal 10 readiness initiative, for these helpful updates!

Drupal 10 is coming and the best way to get prepared for it is to stay updated. With Drupal now adapting to a flexible update schedule and easier migration processes, organizations are less likely to think twice before making that change. If you’re looking to migrate your website to Drupal 9 and get prepared for Drupal 10, you can count on our Drupal migration expertise and experience. We’d love to talk!